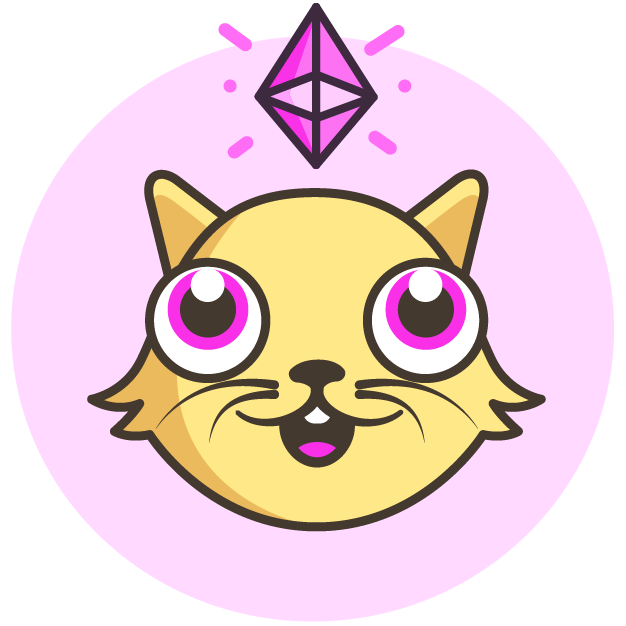 If it wasn’t for CryptoKitties, it would probably take us even longer to scalability issues in the Ethereum blockchain. Gas prices have increased greatly ever since CryptoKitties came around. That’s when alternative blockchains like Polygon, WAX, and Cardano started growing in the market percentage.

So, what are CrypoKitties anyways? CryptoKitties is an NFT collection on the Ethereum blockchain. There are over 2 million NFT right now in this collection, but that’s not how it started. You can breed the cats you have and you’ll get a new NFT.

Of course, there are certain rules and limits that apply to it. However, it is very simple to breed your kitties. You can either do it by breeding two of your own CryptoKitties or by using a public sire.

Public sire kitties can be either free to breed with or the owner may charge you some money. Usually, if the owner is charging some money, that’s because that CryptoKitty has some rare assets.

Obviously, the rarer the assets, the higher the value of your kitty NFT. How does a kitty get these assets? It’s completely random, however, each kitty has a unique DNA.

The DNA of a CryptoKitty also impact what their offsprings will look like.

There are different generation kitties, with Gen 0 being the first one. CryptoKitties were created by Canadian studio Dapper Labs. You may know them by their also popular NBA Top Shot collection.

The only downside of CryptoKitties is that they are only on the Ethereum blockchain. If you want to buy a CryptoKitty NFT for cheap, you’ll pay high transaction fees because Ethereum has scalability issues. It would be awesome if CryptoKitties were available on at least one more blockchain.

What are some asset groups of CryptoKitties?

And many more other asset groups.

CryptoKitty’s art style is cartoonish and they all follow a similar style. However, each kitty is also a unique one because of its assets. If you take a look at the two images down below, you’ll see what we are talking about.

If you are wondering about the color palette used to draw the CryptoKitties NFT collection, we got you covered. The artists behind this project have used somewhat custom colors, but people have figured it out.

Take a look at the color palette used to draw most of the CryptoKitties. It seems people in the NFT space generally prefer lighter color art. It’s not only CryptoKitties but other collections as well.

These colors are mostly present in the collection, but there are more. Ultra rare CryptoKitties like the BlackVamp one on the picture above tend to have some extra colors.

We are excited to see what the future generations of CryptoKitties will look like and how will the art progress.

The team behind CryptoKitties is better known by their company name Dapper Labs. You may know for this company because of their other NFT collection known as “NBA Top Shot”.

Their project “NBA Top Shot” is officially licensed one and it’s the #1 dApp in the world. However, the party doesn’t stop there. They also got Cheeze Wizards collection that’s a massive success, their own blockchain called flow, and of course, CryptoKitties.

Dapper Labs has grown to become one of the most impactful blockchain companies around the world. Every one of their blockchain projects is moving boundaries of what can be done with this technology.

One of their projects that will soon be out is the UFC digital collectibles. Similar to NBA Top Shot, this is also a project with a legal license. It looks like Dapper Labs is leading the sports collectibles world and doesn’t plan to stop.

Who are the people behind Dapper Labs anyway?

There isn’t a part of the “Dapper Labs” website which says how many people are in the team. However, there is a “Team” page on the “Flow” project made by Dapper Labs. Most of these are working both on CryptoKitties, Flow, and other projects by Dapper Labs.

There are 24 people in the official Flow team, and probably that many freelancers as well. The majority of team members are different Engineers who ensure the whole blockchain part is working flawlessly.

What blockchain is this collection on?

CryptoKitties are on the Ethereum blockchain. This proved to be a bad move later on because of high transaction fees. However, when CryptoKitties was launched, there wasn’t an alternative. We hope that in the future they will support cross-chain.

Another thing that can happen is Ethereum moving to POS (Proof-Of-Stake) next year. If that happens, transaction fees on the Ethereum blockchain could reduce a lot. This is something we all hope for because many different NFT projects are on that blockchain.

What wallet you can use with CryptoKitties?

Any Ethereum wallet that supports ERC-721 (ETH NFT) will work. There are many different wallets, but the most popular ones are:

These are just the most popular, but there are plenty of other wallets. If you don’t know which wallet to get, take a look at our best NFT wallet ranking.

What do you need to purchase CryptoKitties?

You need a digital wallet and enough funds (cryptocurrency). Since CryptoKitties are on the Ethereum blockchain, you’ll need enough ETH to purchase them. You can purchase ETH on any major cryptocurrency exchange.

Make sure to add transaction fees into the price calculation of CryptoKitty as well.

How to buy CryptoKitties NFT?

We have already mentioned how to buy CryptoKitties previously, but let’s go into details. As you may know, the first thing you need is an NFT wallet. It’s totally up to you which one you’ll use. Personally, we use MetaMask as it’s supported on the majority of the best NFT marketplaces.

Let’s go through the exact steps explaining how to buy this NFT:

Does CryptoKitties collection have any utility?

Yes! CryptoKitties actually have a utility, you can breed them and get their offspring. What does that mean? Basically, you’ll get a new NFT every time you breed your kitties.

There are certain rules that apply to breeding, and you got to pay for some transaction fees. However, it’s a way to increase the collection of your CryptoKitties and perhaps even make some money in the process.

About Sorare NFT collection Sorare is an NFT blockchain fantasy....

About Meebits NFT collection It all started after the massive....